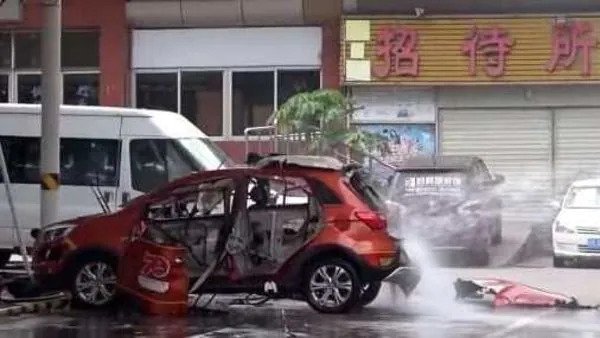 Let us start from the end. Yes, electric cars can explode (so can any car under the wrong circumstances). It is no longer about if they can or not, but more about why and how we can prevent it. Weren’t vehicles of the future supposed to be safer? Well, the following incidents will tell you otherwise.

On a dreadful night in Pennsylvania last year, when a week-old Tesla S Plaid model caught fire, the shock came in tidal waves. The car “spontaneously combusted,” claimed the driver. It was a close call for the man behind the wheel since he barely managed to get out of the vehicle before the flames rose higher. Fortunately, firefighters were quick to respond, arriving in ten minutes and putting out the flames in no time.

On the Eastern side of the world, at least four EVs went up in flames within a single week in India. Most of them were two-wheelers.

On April 19th, 2022, a man in Telangana lost his life because the detachable battery of his EV exploded. While the general public sentiment blamed India’s tropical summers for the incidents, experts pointed to a more plausible reason: a thermal runaway incident.

In layman’s words, the OEMs are the ones to blame. Since new-age startups manufactured most of these vehicles, the testing standards may have been below the mark.

But if that is the case, what about Tesla?

What is Causing the Explosions?

Nobody knows the cause for electric cars explode, speculations are all across the internet, brewing on subreddits and Twitter threads. Many believe that battery management systems (BMS) are to be blamed since they don’t seem to adapt well to the varying dynamics, surroundings, and use cases of EV owners.

Meanwhile, others have boiled down the myriad of speculations to the following three:

Reasons aside, the explosions and fires have raised serious questions about EV safety. If Tesla, the flagbearer of electric mobility, cannot guarantee safety, how can other automakers survive in the markets?

Are Electric Cars Still the Future?

When cell phones with rechargeable battery systems became household staples, one in every two phones faced a battery explosion problem. Interestingly, so did toaster ovens. The first few cars to hit the road could not have survived a crash. Look where we are at today.

The recent incidents of top-brand electric cars catching fire have not laid electric mobility to rest, as skeptics would argue. It’s only a rite of passage in the process of development, not the end.

Once battery technology and testing standards improve, there is no stopping the electric vehicle. After all, Tesla or not, the benefits of electric cars are second to none, since they are low-maintenance, cost-effective in the long run, and user-friendly.

Considering how fast the planet is running out of fossil fuels, the shift towards EVs is an inevitable change. We can be assured that by the time electric vehicles become a household norm, they would have stopped exploding, just like smartphones or toasters.