Is there anything more annoying than seeing someone glide into a public parking space that you shoveled snow out of? However, this is an unfortunate reality for car owners who don’t enjoy the luxury of off-street parking, especially in bustling metropolises, which is why they came up with something called ‘savesies’.

So, what do they do? They indulge in something called “Savesies.” Think of it as unofficially reserving a public parking spot you cleaned and shovelled snow out of to park your car. 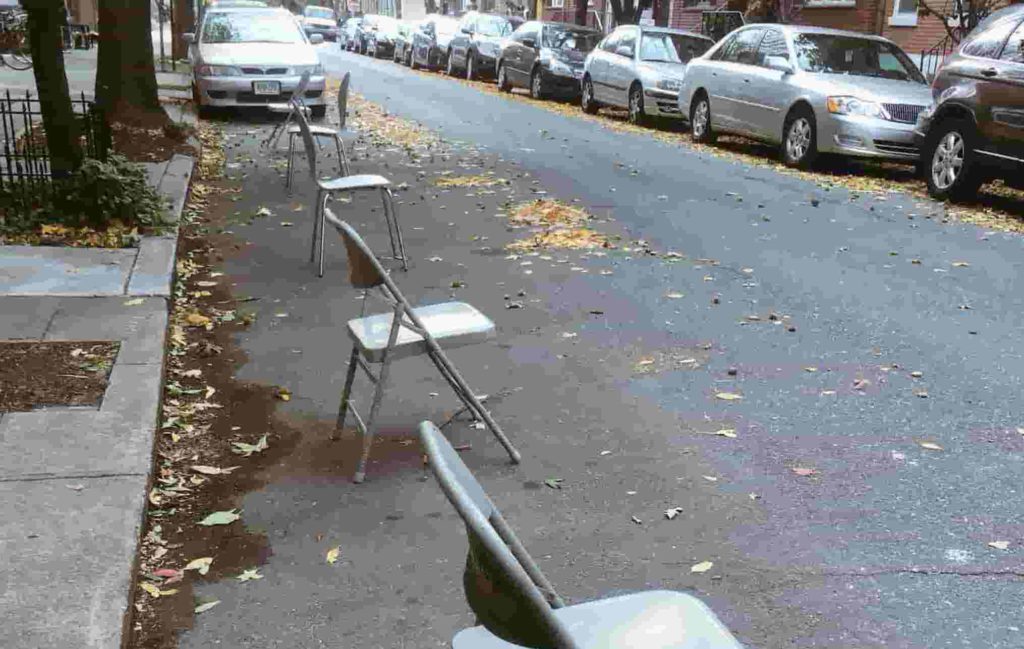 Residents who use street parking leave an object – can be folding chairs, garbage cans, mattresses, even old toilets, and other unimportant articles to block the space. The flipside? The blocked space becomes inaccessible to everybody, other than the person whose items are kept in the space.

Is this practice legal? Not at all! In fact, the savesies practice has parking enforcement in cities like Philadelphia and Boston waste substantial time removing objects blocking access to street parking spots.

Cities with a strong savesies culture

In addition to the cities of Boston and Philadelphia, Pittsburgh uses some of the most bizarre articles, including propane tanks and ladders, to block street parking spots. Metros like New York and Washington D.C. have a hefty fine of up to $2000 for this act.

But, matters worsen when hopeful parkers who shoveled snow out of a spot don’t resolve to the fact that public parking spots are for everybody. They move to action by slashing or deflating the tires, breaking the window, and even spitting on the vehicle parked. Such cases of vandalism have been reported in Boston and Passaic.

Moreover, cities like Hoboken have had the culture of shoveling out snow and saving the parking space with a garbage can since the 50s and 60s. Not respecting the concept of savesies can lead to a fistfight here.

How are local authorities remedying savesies?

Local authorities, like the ones in Philadelphia, have posted special videos online discouraging this practice. They also encourage residents to make the effort of reporting blocked parking spots. In various other cities, parking authorities penalize blockers by imposing hefty fines. Some of the parking enforcement officers personally remove objects blocking street parking.

If a person who blocked the spot is present at the scene, they inform them that it’s a public street, and even though they shoveled snow out, it’s illegal to block it with an object. Seeing an officer present, most blockers remove their objects and may get out of paying a fine.

Even though this practice is illegal in most cities, several people continue to indulge in it. Therefore, in addition to imposing fines, certain authorities, like the Philly police department, began the ‘No Savesies Campaign. Started in 2013, this campaign implores citizens to respect public property and understand its equitable distribution.

No matter the weather, or the space crunch, street parking does not belong to any one person. Therefore, staking a claim by blocking a public parking space is wrong, regardless of how much time an individual spends clearing it. Residents should understand and respect this. And, the local traffic authorities should figure out technology-driven ways to solve the acute shortage of parking slots.