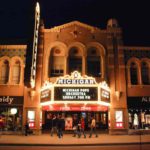 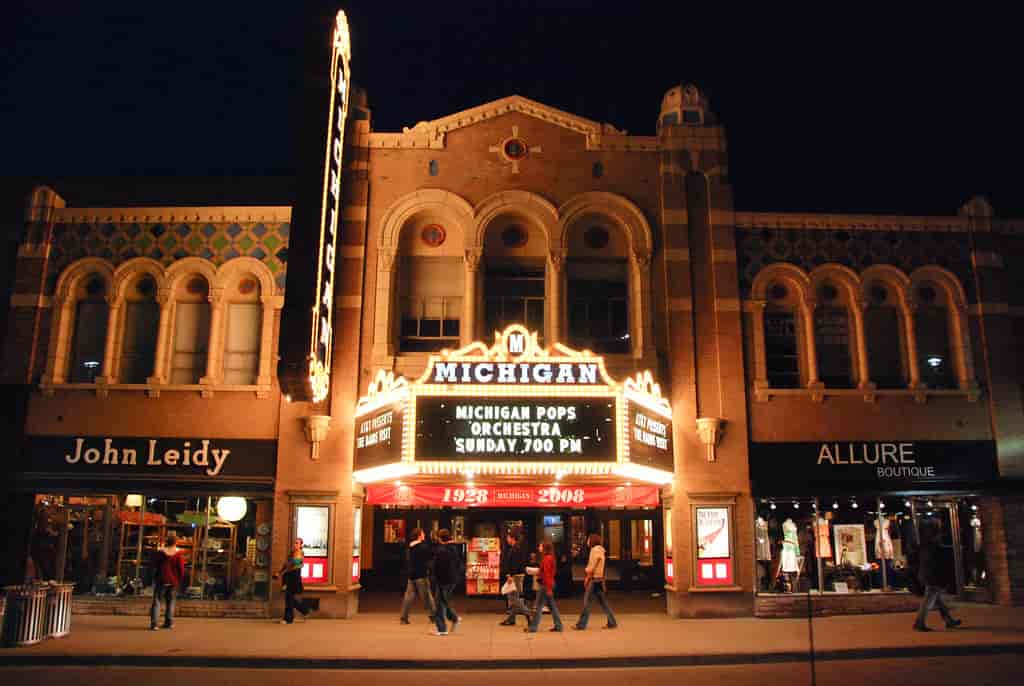 A movie place. A rock club. An inventor’s workshop. The backdrop of Eminem videos. The Michigan Theater has been through it all.

Now, Detroit’s Michigan Theater serves as one of the world’s oddest parking garages. Anyone who has pulled up beneath the ornate domed ceiling of what was once downtown Detroit’sgo-to movie place knows that it’s certainly an eccentric parking place.

But how did a 4000-seat, monstrous concert hall, with its striking Renaissance Revival architecture meet this fate? Let’s dive into its history to find out.

Act 1: The Birth of the Majestic Michigan Theater

During the “roaring twenties,” a time of progressive thinking and high style, Detroit Architects Cornelius W. and George L. Rapp designed the Michigan Theater along with the adjacent Michigan Building office tower.

Replete with decadence, the theater opened in 1926, with a fully functioning stage, black-and-white checkered floors, grand lobbies, curved staircases, carved balustrades, an elaborate red carpet, and over 4,000 seats – all designed around its core competency of being a concert hall and a theater. It began its reign with the film “You Never Know Women” with Lowell Sherman and Florence Vidor.

In its early days, the theater was used as a commercial vaudeville. It hosted five shows daily, starting at 10:30 AM every morning – two 20-minute stage shows a concert by the orchestra, singers and dancers, and a film. Seats were sold at an ‘any seat same price’ policy, which wavered between 35 cents to 75 cents, depending upon the time of day.

During its peak, it hosted legends like Frank Sinatra, Louis Armstrong, The Marks Brothers, and Doris Day. However, by the 1940s, the changing times led the theater to focus more on cinema.

Act 2: The Curtain Rises and Falls

Over the next fifty-odd years since its inception, The Michigan Theater changed many hands. Initially, the place was run by the Balaban & Katz group of Chicago, in partnership with Detroit’s theater tycoon, John H. Kunsky.

However, after Kunsky’s chain of theaters fell apart during the depression, the Michigan theater fell into the hands of United Detroit Theaters, where it spent most of its life and underwent the most changes.

To keep up with the tides of time, the theater installed a wide-screen in 1954, but at the cost of its proscenium arch’s structural integrity. Moreover, it was one of the only twelve theaters in the USA showing 3D movies like ‘House of Wax.’

Unfortunately, with the rise of suburban theaters and television, the attendance at Detroit’s film houses dropped dramatically by the 60s. One after another, the marquees of Detroit’s grand movie houses went dark – the Annex in 1949, the Majestic in 1951, and finally the Hollywood in 1958.

By the mid-1960s, the Michigan theatre had grown into an entirely unprofitable venture, which led to the United Detroit Theaters selling it. The new owners, however, cared only about the adjacent Michigan Building and couldn’t care less about running the theater. The Michigan was set to close only four days later after changing hands.

Its supposed last show garnered an attendance of mere 400 people, far from the 4,000 it was used to hosting in its glory days. With the double billing of “A Thousand Clowns” and “The Spy with a Cold Nose” with Laurence Harvey, the theater ended its 41-year old-reign in 1967, before it was revived by Nicholas George – a new theater tycoon – for another four years. But its glory had passed, and it shut down for good in 1971.

For the next six years, the theater went through many rounds of transformations – first a supper club, then a rock venue, and finally, a nightclub. But things quickly took a turn for the worse. After that, the theater became a festering ground for vandalism, causing damage so significant that the only solution was the wrecking ball.

But architectural studies revealed that bringing the theater would compromise the soundness of the adjacent Michigan Building. The solution was one of the most creative, albeit unusual, fates to ever befall such a historical landmark – it would be built into the state’s only Italian Renaissance-style parking garage.

The building’s owners paid $525,000 to gut the theater altogether and build a three-story, 160-space parking deck inside it. The balcony and mezzanine were pulled down, and so was the grand staircase. While most walls were brought down and the beauty of the historical site ravaged, much of the theater remains today – the ticket booth, proscenium arch, four-story lobby, the upper balcony, and even the red curtains.

Today, the sight of vehicles parked under the smeared but magnificent dome makes photographers, tourists, and vehicle-owners gape in disbelief. Fun fact: back in the day, the theater was infamous for its lack of parking space, which seems sadly ironic given its current state.

The dome that had once loomed over many legends of yesteryear would now look over Hondas, Toyotas, Chevrolets, and Fords.

And as if irony didn’t already have a long day, the theater was built where a small garage once stood, where henry Ford built his first automobile – the Quadricycle.

The site of Ford Motor’s birthplace, claimed by the Michigan Theater, only to be reclaimed back by the automobile.