There was a time when the possibility of a car driving itself around without human intervention was a mere idea until it became a plan put down in pen and paper, and today, self-driving cars are a reality waiting to be rolled out! Can self-driving cars master the skill of navigating around double-parked vehicles? Let’s find out how self-driving cars deal with double parking. 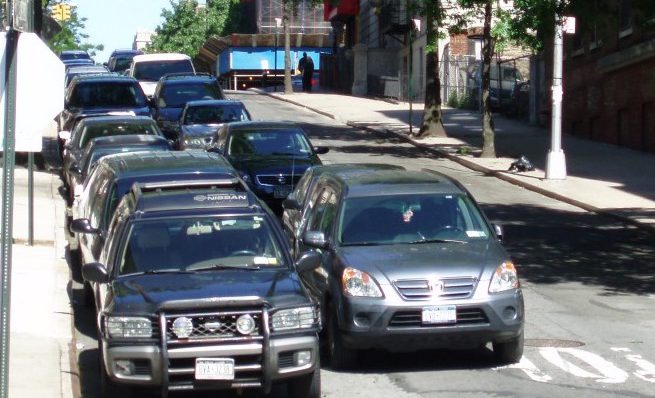 Self-driving cars can acknowledge traffic signals and road signs, obey speed limits, pick up and drop off, and park themselves in and out of a parking lot. However, learning the rules of the road is merely the beginning. Such standard rules are relatively easy to follow when compared to the unpredictability of human drivers.

Well, self-driving cars may ace other driving elements, but what about double parking? That is an equally important driving skill without which self-sufficiency cannot be achieved. Meaning, you cannot really rely on an autonomous vehicle without the ability to overcome situations of double parking. After all, double parking is everywhere!

Manufacturers of such technological wonders are painfully aware of the importance of making their autonomous fleets self-sufficient. As a result, predictive technology in tandem with the car’s interrelated computing devices such as cameras, sensors, radars, etc. is being deployed and tested to overcome the challenge of double-parking. And as of now, efforts are bearing fruits.

Also Read: How Does a Self-Driving Car Park?

Diving Deep into the Mind of a Self-Driving Car

Ever wanted to navigate your way through the mind of a self-driving car? What exactly do such cars think on encountering a double-parked vehicle and how or do they even overcome such a situation?

Well, on an average, two basic things run through the mind of every self-driving car when they come in contact with a double-parked vehicle –

The very first step in dealing with a double-parked vehicle is to figure out its presence. During this initial stage, the autonomous car is thinking, “Where am I and what is happening around me?” Here, it is trying to perceive its surroundings through its senses (cameras and sensors) to have a clear idea of what’s going on. This means synthesizing several cues at once – how far the vehicle is from the edge of the road, the last time it could be sensed moving, would it be possible to look around it to identify other cars and obstacles, how close we are from the intersection, etc.

Other contextual cues are also involved, such as the type of vehicle, lack of parking in the vicinity, etc. For this, self-driving cars use cameras for knowing about road features (safety cones and signage), lidars for distance measurements, and radars for speeds.

Now that it has gained some idea of the situation via its cameras and sensors, its next thought is “Given the situation, what should be my next move?” At this stage, the technology is prepping itself with the best possible solution of getting past or around the double-parked vehicle. Once the solution has been decided, the car now has to answer the question, “How should I go about executing my plan?” Suppose the vehicle in front is not an active participant in the traffic flow; the self-driving car will either try to change the lane or route away from the perceived “obstacle.”

Every time an AV does this, it needs to consider the location of the double-parked vehicle, the moves taken by other drivers, and the safest method to bypass the vehicle. Hence, the maneuver is executed based on Model Predictive Control (MPC), Linear Quadratic Control (LQC), among others – basically, careful consideration of the actions of other drivers and predictions on their most likely move.

Finally, once the decisions have been taken, the plan is transmitted to the controllers that govern the self-driving car’s movement, which then execute the plan.

Now, the importance of equipping self-driving cars with the ability to successfully maneuver around double-parked vehicles also depends upon the encounter rates – the rate at which such incidents are bound to occur.

For a large city such as San Francisco, the encounter rate is a whopping 24:1! Other US cities such as Arizona, Phoenix, etc. have a much lower encounter rate and depending on this, different approaches will be taken. In fact, in San Francisco, a self-driving car may have to encounter construction sites, cyclists, pedestrians, emergency and other vehicles almost 46 times more often than in any other city.

For instance – A company by the name Cruise is carrying out pilot projects in San Francisco and based on this particular city’s encounter rate, the path chosen by self-driving cars there would be similar to the one mentioned above. However, in Arizona, Waymo is carrying out pilot projects of its self-driving fleet, and the scenario is vastly different. The company’s wireless minivans, on detecting a double-parked vehicle, tag it as stalled. On identification, they look for the best way to maneuver around it. Cruise’s bold step of testing its autonomous fleets in large and busy cities such as San Francisco offers much hope.

Though it is unlikely that self-sufficient self-driving cars would be available for public use anytime soon, such efforts ensure that once they’re out, they will be able to deal with the most complex of road situations.